Findify is now part of Maropost As all merchants can no doubt attest to, retail is an ever-changing landscape.

Those who have been in the game long enough may remember business in the 90s and 00s – where the biggest challenge (and opportunity) lay in the rise of ecommerce. 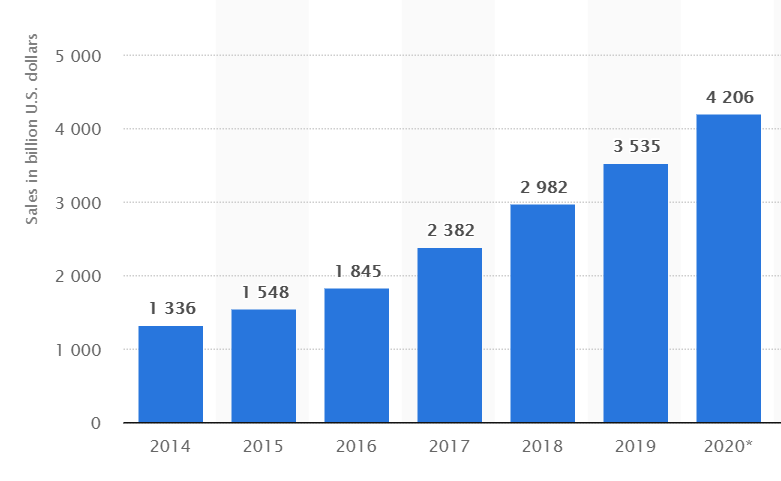 Today, with the vast majority of retailers embracing ecommerce, facilitating more than 3.5bn dollars in online sales every year (and growing), many experts believe the biggest challenge (and, again, opportunity) lies in the rise of mobile sales.

For the last few years, these experts have been expounding the virtues of mobile first, warning that mobile ecommerce would only continue to grow.

Now, new research and statistics, conducted and compiled by Findify experts, has revealed the magnitude of this shift, showing not only how incredibly important mobile ecommerce has become today, but also analyzing the tangible and measurable extent with which it has grown over the course of the last 16 months.

In a study of more than 4.2 million shoppers interacting with Findify solutions (on the websites of Findify clients), conducted over a one week period in April, 2020, shoppers using a mobile device accounted for more than 60% of all traffic.

For the same period, shoppers using desktop devices accounted for almost 30% of all traffic. Fewer than 5% of people were shopping on tablets.

Findify stats for a one week period in April, 2020 show devices used by online shoppers, based on 4.2 million unique visits.

While this snapshot of online shopper behaviour serves as an important reminder of the continued staggering growth of mobile ecommerce, the exact percentages of devices used fluctuate slightly when analysed over longer periods.

With this in mind, Findify experts conducted further research, diving into the shopping behaviour evidenced in 1.8 billion online shopping sessions.

In January, 2019, for example, mobile traffic was only just exceeding that of desktop traffic. Roughly 43% of all visits were from mobile, with roughly 40% from desktop.

The below graph illustrates how this has changed over time, with mobile traffic increasing significantly while desktop and tablet traffic continue to decrease.

Findify stats showing devices used by online shoppers between January 2019 and May 2020, based on 1.8 billion sessions.

Both instances show an increase in mobile traffic specifically, with a corresponding decrease in desktop traffic, proving that there remains roughly the same amount of shoppers, but these shoppers are favouring mobile devices over desktop devices, gradually changing their shopping behaviour.

Does mobile ecommerce revenue also exceed that of desktop?

There’s no denying that mobile users make up the majority of an online store’s overall traffic, but are they just there to browse? Or do they actually buy?

According to the stats, they actually buy. In the below graph, based on 16 months of revenue generated by more than 1.8 billion sessions on hundreds of online ecommerce stores, mobile sales were consistently between 16% and 20% higher than desktop sales.

Findify stats showing percentage of revenue generated per device between January 2019 and May 2020, based on 1.8 billion sessions.

So what does this mean for ecommerce merchants? According to Findify CCO, Joakim Amadeus Olsson, it means they should be allocating more resources towards ensuring the online version of their store truly is mobile first.

“We interact with many merchants, many times a day, and we’ve realized that while a majority recognize the importance of mobile, very few are truly mobile first in their priorities and initiatives. This is of course extremely understandable, given that desktop has been the dominant window for many years now, yielding amazing results with capabilities still far beyond mobile. Change is always hard to truly implement and you don’t necessarily want to fix something that’s not currently broken,” he said.

“But the stats don’t lie – consumer behaviour is changing and will continue to change. More consumers are shopping, and buying, on mobile devices these days than on desktop, with the gap between the two behaviours continuously increasing. That’s a fact. Retailers need to occupy space where their customers already are – and that’s on mobile. In my opinion, the businesses that not only recognize this, but take action on it, will be the ones seeing the most long term success in the coming years.”

This research was conducted by experts at Findify, a leading provider of site search and personalization software. For more information on Findify’s powerful ecommerce tool, which includes solutions such as Personalized Search, Smart Collections, and Recommendations, book a demo here.

Upgraded Shopify Recommendations for improved ease of use